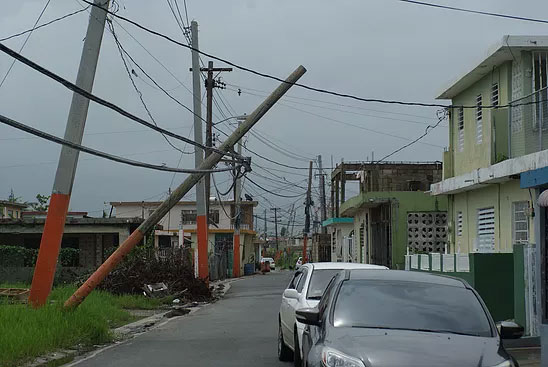 Tapped by PREPA, Whitefish was supposed to help. But questions arose soon after news broke on Oct. 19 that the Montana-based company was chosen over bigger and better known companies vying for the job. When it was hired, 2-year-old Whitefish had just two workers.

Ramos told CNN he picked Whitefish because it did not demand a down payment and agreed to take care of the logistics for workers’ housing and food.

Whitefish said it was contracting with hundreds of workers to restore transmission and distribution lines, reports The Washington Post. But as NPR’s Laurel Wamsley has reported, “(p)ower companies don’t generally use contractors to restore electricity but make arrangements for help from other utilities.”

“Much of the controversy that has surrounded the contract has focused on the high rates Whitefish is charging for labor. The contract shows those labor rates are pricey indeed: $240 an hour for a general foreman and $227 for a lineman. The per diems are also expensive: almost $80 a day for meals, and $332 a day for lodging. Employee flights are billed at $1,000 each way.”

“For subcontractors, the bulk of Whitefish’s workforce, the prices go even higher. A general foreman costs $336 an hour and a lineman, $319.

“Usually after huge power outages, electric companies arrange mutual aid agreements with utilities elsewhere to bring in workers to help restore power. But that would most likely have required assurances of payment, and PREPA has been bankrupt since July. So PREPA CEO Ricardo Ramos made a deal with Whitefish, which asked